Save the planet with a coffee pod sampler of tasty flavors in eco-friendly, compostable capsules 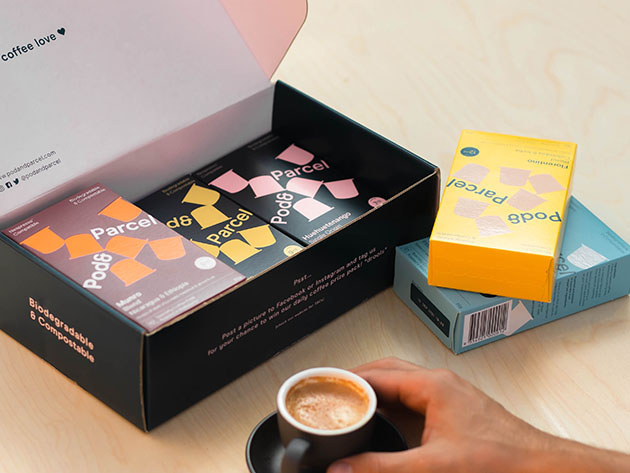 Considering the human race’s utter dependence on coffee, it’s no surprise that more than 40 percent of American homes have a single-cup coffee brewing system. Unfortunately, most of those machines take pods made from various plastic and aluminum materials that aren’t easily recyclable. And while 39,000 of those pods are made every minute worldwide, about 29,000 of those pods will ultimately end up in landfills, where they’ll all sit for up to 500 years.

Those are not numbers that’ll make you feel good about your obsession with the perfect cup of coffee. Thankfully, manufacturers are taking note and we’re beginning to see more and more coffee makers start producing compostable pods to combat the ill effects on our environment.

For example, you can try out a collection of offerings from Australia’s tastiest sustainable and compostable coffee pod maker Pod and Parcel with a 60-pod sample pack.

Pod and Parcel use specialty-grade Arabica beans roasted in the coffee mecca of Melbourne to create six of their most satisfying flavors: Mbeya, Huehuetenango, Bezzera, Florentino, Munro, and Bancroft. Matching blends originating from around the world, each flavor producing intensities from rich and balanced up to bold and assertive.

The collection features 10 pods of each variety, with each ready to brew in its own biodegradable and compostable pod. The pod capsules engineered to work with all original style Nespresso coffee machines are made from plant-based materials that break down in just 90 days, shrinking your carbon footprint and assuring you’re part of the ecological solution, not the problem.

Made from a patented bio-based polymer derived from renewable and sustainable sources like corn and potato starch these pods also release up to 75 percent less C02 during production when compared to aluminum.

With this sampler, you can try some of the most original flavors from one of the world’s premier artisan coffee makers, all with the peace of mind that your addiction isn’t damaging the planet. On top of that, the 60-pod collection is also $7 off right now, available for only $39.99.

• Amazon’s new Chinese thermal spycam vendor was blacklisted by U.S. over allegations it helped China detain and monitor Uighurs and other Muslim minorities

Hackers tried to break into WHO, which faces more than two-fold increase in cyberattacks

Hackers tried to break into the World Health Organization earlier in March, as the COVID-19 pandemic spread, Reuters reports. Security experts blame an advanced cyber-espionage hacker group known as DarkHotel. A senior agency official says the WHO has been facing a more than two-fold increase in cyberattacks since the coronavirus pandemic began.

Is it time to finally learn to play the guitar? Now’s your chance with this bundle of lessons

“Learning to play the guitar is for losers. You’ll never catch me doing that.” That phrase has never been uttered by anyone anywhere ever.  Those words have never been constructed in that order because they’re ridiculous. In fact, guitar players are probably in the running with professional athletes, ninjas, and James Dean for the title […]

Maybe you’re frustrated about work. Maybe the kids have you climbing the walls. Or maybe the fact there’s a worldwide pandemic trapping you inside your home has you a little off your game. In these scary, off-kilter times, anxiety in some form can be found on almost everyone’s doorstep. There’s no shame in admitting you […]

CBD Oil, Cannabinoid Doesn’t Have To Be Hard. Read These 9 Tips
Find out more

53 fun vacations to celebrate if you require something to eagerly anticipate this summertime What You Need to Know Before Stocking Up on Weed, According to an Expert